We all meet through different outlets and have stories on the weird and wonderful ways in which we come to interact and become friends in this car community. As I pulled up on a strangers driveway on a cold snowy November night, I’d no idea that the garage I was parked beside held such an interesting secret.

The 1997 Honda Civic EK has been a popular choice for plenty of enthusiasts looking for a race project due to their lightweight body and exceptional handling capabilities. It also helps that you can pick up spare parts for pennies in comparison with many hot hatches. Over the years I’ve glanced at many stripped shells and spoke to plenty of enthusiasts that had big plans or a race deadline, but not many have had the ambition of Derek a local driver from Co.Armagh

Derek was raised on the race track, winning 4 saloon car championships in both the north and south of Ireland. He took a break from racing for fews after, but has been working on his EK civic build for a few years and the process so far is amazing

The seats been adjusted back for a better weight distribution meaning a custom steering column had to be made to sit alongside the dc2 steering rack thats been installed. The rear suspension has been treated to spherical trailing arm bushes which have blown my mind. The shells been lightened and given a set of beautifully crafted fibreglass doors to match the fibreglass boot lid and bonnet.

Under the bonnet may be empty now, but the words K20, Turbo and TDP Ireland were mentioned which can only lead to great things. The car will be running from a motec ECU package allowing full adjustability of the engine set up depending on track set up 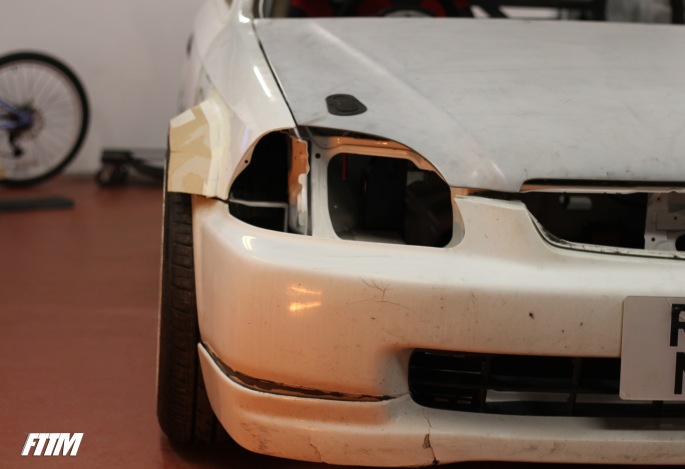 The list of modifications even at this stage is enormous that it wasn’t until a began writing this that I fully appreciated the work thats went into getting this car to this stage. Derek’s a great guy and its safe to say I’ll be following his build closely from here on out.